CCNA Security Chapter 4 Test v2.0 will be discussed in this post. All questions and answers for CCNAS Chapter 4 v2.0 displayed as below. Hopefully it will be useful for you guys to study this chapter. Do leave your comment if you find new questions for this chapter or any corrections needed.

The initial packet is dropped, but subsequent packets are forwarded.

The packet is forwarded, and an alert is generated.

The packet is forwarded, and no alert is generated.

The packet is dropped.

Traffic that originates from the inside interface is generally blocked entirely or very selectively permitted to the outside interface.

Traffic that originates from the DMZ interface is selectively permitted to the outside interface.

Traffic that originates from the outside interface is permitted to traverse the firewall to the inside interface with few or no restrictions.

These ACEs automatically appear at the end of every IPv6 ACL to allow IPv6 routing to occur.

These are optional ACEs that can be added to the end of an IPv6 ACL to allow ICMP messages that are defined in object groups named nd-na and nd-ns.

These ACEs must be manually added to the end of every IPv6 ACL to allow IPv6 routing to occur.

When traffic returns from its destination, it is reinspected, and a new entry is added to the state table.

The internal interface ACL is reconfigured to allow the host IP address access to the Internet.

The entry remains in the state table after the session is terminated so that it can be reused by the host.

A dynamic ACL entry is added to the external interface in the inbound direction.

deny tcp any any eq telnet

permit ip any any

traffic that is going from the private network to the DMZ

access-list 100 permit ip any any

Which two actions are taken if the access list is placed inbound on a router Gigabit Ethernet port that has the IP address 192.168.10.254 assigned? (Choose two.)

Only the network device assigned the IP address 192.168.10.1 is allowed to access the router.

Only Layer 3 connections are allowed to be made from the router to any other network device.

A Telnet or SSH session is allowed from any device on the 192.168.10.0 into the router with this access list assigned.

not as effective with UDP- or ICMP-based traffic

An interface must be assigned to a security zone before IP inspection can occur.

Both models must be implemented on all interfaces.

The two models cannot be implemented on a single interface.

A Classic Firewall and Zone-Based Firewall cannot be used concurrently.

If one interface is a zone member, but the other is not, all traffic will be passed.

If neither interface is a zone member, then the action is to pass traffic.

If both interfaces are members of the same zone, all traffic will be passed.

If one interface is a zone member and a zone-pair exists, all traffic will be passed.

If both interfaces belong to the same zone-pair and a policy exists, all traffic will be passed. 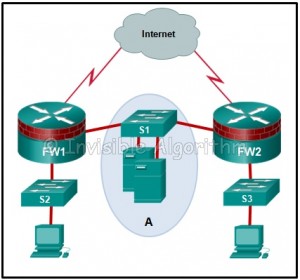 The __________ action in a Cisco IOS Zone-Based Policy Firewall is similar to a permit statement in an ACL.

logging of rejected or dropped packets

forwarding traffic from one zone to another

tracking the state of connections between zones

Do comment below for new questions or answers. You are also welcome to email to admin@invialgo.com. Thank you